Together we fight cancer. #worldcancerday #IAmAndIWill

The Evolution of Cancer Treatments

When Scott Yonkouski discovered that he had a brain tumor, he “shut down”. It’s a natural reaction to a terrifying diagnosis. Scott, however, was lucky. His meningioma was surgically removed and he returned to his normal life. Two years later, when the tumor came back, Scott was slightly more prepared for the upcoming surgery which was followed up with radiation therapy. Thankfully, Scott was able to make a full recovery. Stories like Scott’s are becoming more and more common nowadays as our understanding of cancer and the development of its treatments evolve. 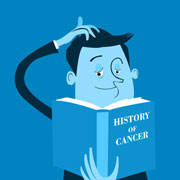 What we consider standard cancer treatments today weren’t so common even just a few decades ago and even less so looking back through history. Cancer, however, is not a new disease. Evidence in the bones and records of old civilizations, such as the ancient Egyptians, show that cancer has afflicted human beings since at least 3000-2000 BCEi. Cancer wasn’t given a name, however, until the Greek physician Hippocrates, who lived from 460-370 BCE, called non-ulcer forming tumors “carcinos” and ulcer-forming tumors “carcinoma”, from the Greek word for “crab” due to its resemblance to the crustaceanii.

The disease has always been a mystery to those who studied it. Ancient physicians believed that health relied on a balance between four different liquids, known as humors. In the 1st century AD, Roman physician Claudius Galen theorized that cancer was caused by too much of one of the humors called “melancholia” or “black bile”, a substance that was often blamed for diseases that couldn’t otherwise be explainediii.

It wasn’t until almost fifteen hundred years later in 1540 when Flemish born physician Andreas Vesalius broke with Galen’s theories and began making his own observations about human anatomyiv. Vesalius noticed that there were many discrepancies between Galen’s teachings and actual human anatomy, notably, that there was no black bile to be found, giving rise to the new idea that when people become ill, it’s because there is something wrong with their bodyv.

Developments in understanding of and research into human anatomy and cancer were historically slow. It’s been only since about the mid-1700s that scientists have gained a better grasp of the human body and even more recently an understanding of the nature of cancer.

The beginnings of modern understanding of cancer 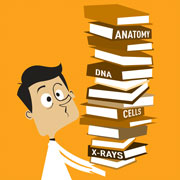 By the mid-1800s, German researcher Rudolf Virchow was examining cells under a microscope. He determined then cell growth can only occur one of two ways: hypertrophy, when a single cell increases in size, and hyperplasia, when the number of cells increasevi. By the time Virchow passed away at the beginning of the 20th century, theories about cancer were arising from Virchow’s observances, including that cancer was a disease of hyperplasia, with cells dividing at their own will, resulting in tumorsvii.

While surgery had always been the preferred method of treatment when the cancer was accessible, even dating back to ancient times, it wasn’t until the late 1800s that radiation was discovered to not only cause cancer but also be useful in the eradication of it. In 1896, Dr. Wilhelm Röntgen made his revolutionary discovery of X-Rays and just three weeks later, a student doctor in Chicago named Emil Grubbé used X-Rays to treat cancerviii.

When the structure of DNA was unraveled in the mid-1900s by James Watson and Francis Crick (who would win the Nobel Prize in 1962 for their discovery), research into cancer as a hereditary disease, passed down through a person’s genes, opened upix. This discovery also lead to a greater understanding of cancer’s genes and how they could be damaged with radiation, chemicals or virusesx. Thanks to this research, we now have many ways to treat cancer, such as radiation therapy, chemotherapy and immunotherapy.

What’s next in cancer treatment 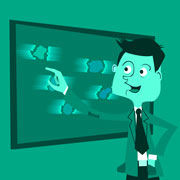 Recent trends show that more patients than ever are surviving cancer, which shows that progress is being made toward finding effective treatmentsxii. Today, some cancers are being increasingly considered chronic illnesses that can be managed over longer periods of time, like in the case of Scott Yonkouski, a perception that would have been unthinkable even a few decades ago. As our knowledge of the disease progresses, so do the many ways we fight it.

Since cancer treatments are constantly and rapidly evolving, consulting the American Cancer Society, the National Cancer Institute or other trusted sources for unbiased information is a great place to start to learn more about the disease and its treatments. If you or someone you know has been diagnosed with cancer, the best resource for information about the latest treatment options is always your physician or cancer care team.